This year’s nominations for the local Southwark Blue Plaque are below. Please submit your vote at the bottom of the page. 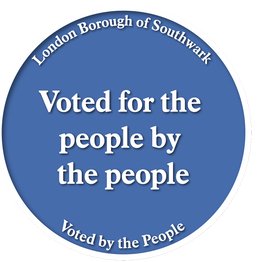 Helen Aldwinckle (1920-2020) was one of the most senior female code breakers at Bletchley Park. Born in Aberdeen, her career not only included her time at Bletchley Park but in the 1970s became a noted art gallery manager. She lived at Farquhar Road SE19 from 1979 to 2014, spending her final years in a care home. Just before she died she was awarded France’s highest honour, the Legion d’Honneur for her wartime contribution. Helene Aldwinckle (née Taylor) was one of the most senior women codebreakers at Bletchley Park during the war. She died in April last year aged 99. Her obituary in the Guardian - Helene Aldwinckle obituary | Second world war | The Guardian - written by historian Michael Smith, is a good summary of what she achieved (pdf attached), as is her Times obituary (pdf copy attached)

She lived at 76 Farquhar Road, London SE19 1LT, from 1979 until 2014, when she went into a care home for her final years. As you will see from the obituaries, she was awarded the Legion d’honneur, France’s highest military and civilian honour, in 2019 at age 98 for her work in breaking the German Enigma codes in 1944 and the role she played in the liberation of France. Unfortunately, because of lockdown restrictions, we were not able to have a funeral for her, so were she to be awarded a plaque, this would provide a wonderful opportunity to commemorate her life and achievements. The family who now live in the house, who used to know her as neighbours, suggested her name was put forward.

By a strange coincidence, the Gipsy Hill Brewing company – www.gipsyhillbrew.com – which is only a few streets away from Farquhar Road, brewed a special beer a couple of years ago called Codebreaker using a hop variety called Enigma. Were Helen to be voted to recieve a plaque, the family would ask them if they could brew another batch in celebration!

The Reverend James Butterworth (1922-1976) was a Methodist minister who established Clubland, a pioneering youth club in Walworth in 1932. It became renowned for its mixture of social and faith based activities. “Jimmy” Butterworth was an energetic fundraiser and attracted famous names of the day to the club, including Bob Hope, Lawrence Olivier and Queen Mary.

Len Deighton (b. 1929) is a renowned British author, best known for his spy novels and thrillers, such as the Ipcress File and Bomber. He lived in Merrick Square SE1 during the 1960s and 1970s, where he wrote many of his best known works. Less well known is Deighton’s skill and interest in cooking and he wrote two cookery books and even a cookery “strip” for The Observer newspaper.

Francis Peek (1833-1899) spent much of his early life running the family tea importing business. He took over Peek, Winch and Co., the firm his father began, and grew it into an extraordinarily successful business. In later life, Peek became a champion of preserving London’s open spaces and persuaded Dulwich College Estate to agree to create a public space from their lands, for which he offered funding, and Dulwich Park, opening in 1890 was the result. Peek was also a strong advocate for education, church and charitable causes and social improvement.

Barbara Steveni (1928-2020) was a prolific artist and activist. As well as being a wide ranging conceptual artist in her own right, she also co-founded the Artist Placement Group in the 1960s, putting artists at the heart of organisations making social connections. Originally born in Iran, she lived in Peckham from 1995 until her death and made a massive contribution to the art scene in Southwark as well as far wider.

Select your candidate using one of the buttons below - this will open an email window with your choice in the subject line, which can be sent as-is: Please do not change the subject line.