Voted for by the people of Southwark

Southwark Heritage Association and its Partners have been working to promote the people, places and events of our borough both historic and modern day since 2002 and have successfully put up over 50 plaques in our borough.

If you would like to make a nomination, please click the button below. A guide to how to nominate and who can vote is here 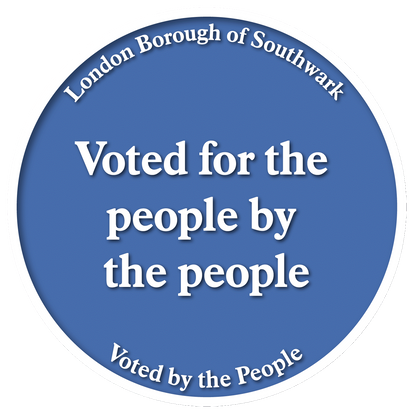 All of the Blue Plaques that have been installed to date

Anyone can cast a vote. Votes can be made by email to Southwark News, by voting card or by a voting book opened by supporters for that purpose, the results of which must reach Southwark Heritage Association by September 15th each year.

Nominations can be submitted online using the online form or by downloading the form from the Southwark News website. Nominations can be made between 1st January and the 1st June each year for selection and voting on by the people between 30th June and 15th September. The plaque for the successful candidates will be erected the following year.

•  The subject matter for nomination can be for people, buildings, open spaces, parks, and structures.

•  A nominated person or place's achievements or contributions must be historical or nationally recognised.

•  An address must be given for the proposed site where the blue plaque is recommended to recognise the person or place. The nomination subject and address must be within the boundaries of the London borough of Southwark as known from 1965.

•  If nominating a person, the person must have a connection to the borough of Southwark, either through work, residency, or place of birth. Dates must be provided along with the reasons for nomination.

•  A year must pass before a person who has died can be nominated.

•  A nominee already awarded a blue plaque will not be eligible for nomination, to check visit: www.southwark.org .uk

•  A nominee that has been up for public vote and has scored less than 90% of the highest vote that year, may not be put forward as a nomination for 5 years .

•  If a nominee scores over 90% of the highest public vote that year but fails to gain enough votes for a blue plaque after three attempts will no longer be eligible for nomination.

•  All eligible nominations, with dates and historical background information, will then form the list that will then be available for public voting. This list will be published on the Southwark Council, Southwark Heritage Association and Southwark News website and newspaper.

•  The role of the steering group is to ensure the historical aspect of the scheme is adhered to, and to help promote Southwark's heritage through the Blue Plaque scheme.

•  The steering group will meet at the end of the nomination process to discuss the candidates that have been put forward. At this stage the eligibility of the nominations is scrutinised using the criteria set out above. Nominees that do not meet the criteria will be removed from the list. At the end of the voting period the steering group will meet again to discuss the winner and update the group of any change of circumstances for the winner.